Things may have changed since this post was published. But great for posterity.

Lindsay and I met in fall 2003, his first semester in college when he pledged Sigma Nu. It was my senior year. We had so much in common that we instantly became lifelong friends.

There were more than a few late nights in college when Lindsay and I were the last ones left. We used to talk tons of shit about how we were going to start all kinds of businesses together and take over everything and be badass and uuhhh it’s gonna be SICK!!

My plan was to come down to San Diego and write a book. Lindsay and Laura Dobkins, Lindsay’s peer from the Art Institute, had started a business called Round Two about three months earlier. We agreed to do an exchange: Round Two would help me work on my book project, and I’d work on projects for Round Two.

As we started the process I became more involved with Round Two – working on the sales program for the website package they were preparing to launch, asking questions, offering ideas and doing some writing – after a little while I was at the studio in Little Italy every day.

As we were about to start making money it seemed we would need more than just an exchange, and we had to figure out how it was going to work. About this time I made a proposal to Lindsay and Laura to bring me on as a full partner in Round Two.

Three times when I worked for Sigma Nu Fraternity, Inc. I had a chance to negotiate my employment, which I always knew would be great experience for the future. Invaluable.

Essentially I thanked the two for the opportunity to work with them up to that point and that I knew they could and would run a successful business without me, but that I wanted to be a part of it. I shared my thoughts on what I could bring to the table: skills, connections, experience and intangibles, even though I don’t have any of the technical skills that Round Two is built around. I also shared where I thought Round Two could potentially be in one, three, five and ten years, and where we could be if I were a partner. I insisted that Lindsay didn’t factor our friendship into consideration, and that he and Laura discuss together and make the best decision for the business. 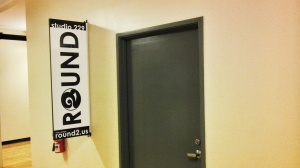 The next day they accepted my offer and invited me to join Round Two.

We started off by offering a website package to creative professionals, like photographers and artists. But things moved quickly with our packages as we started focusing more on businesses and e-commerce packages.

Lindsay had been doing freelance work with a company called iQ Power Tools, which builds the only dust-free concrete and masonry power tools in the world. If you’ve ever seen concrete or masonry being cut you know this sounds incredible, which it is.

It’s funny that some three years ago when Lindsay first worked for them he’d told me all about their business. I was so inspired by their product at the time that I actually wrote up my version of a sales plan, based on what Lindsay had told me about the company.

iQ is a longer story, but with Lindsay still doing design and photography work for iQ they eventually approached us about managing all of their digital marketing. This turned into building a new e-commerce website, improving their SEO, designing and managing their social media, copywriting and their entire digital marketing plan. We’re now doing all of this and essentially consulting their marketing and sales under a retainer agreement, making them our biggest client.

We have an excellent relationship with iQ and both companies have a great deal to offer each other. We see their success as our success and we’re motivated to exceed expectations.

Josh Green from Sigma Nu Fraternity did a session with us called Built to Last, which started us defining our core purpose and values. We’ve since been working – for at least two months – on finishing this process, to also include our five-year strategic plan and other Round Two core issues. The thinking and writing and refining and articulating…it’s been a beast, but really great. We are building a business. Every day.

We’ve continued selling websites to local businesses, and in particular a niche of men’s “streetwear” shops. These are local brands that do headwear, men’s apparel, accessories, sunglasses and other sick shit. Several of these businesses are located on a particular corner of downtown on 8th and G streets.

One of these is Product Etcetera. They’re actually a design firm that does a lot of creative work, but also a brand, doing mostly headwear and men’s apparel. They’ve been around for over four years now, have a lot of relationships and have been successful.

Lindsay started out doing freelance work with ProductEtc. before founding Round Two with Laura, and they’ve been with us since the beginning. We have a great relationship with their owners Tony and Jordan; we’ve done quite a bit of work for each other and partnered on projects. We have a lot of trust and they’ve continually pointed business our way.

After Josh’s session we did a similar Built to Last program with Product Etcetera to test out if it’s a service we might be able to offer. They gave us some great feedback and we’ve shaped it into a service.

This consulting business makes sense, so we’ve started working with other businesses in similar form, while continuing to build websites. 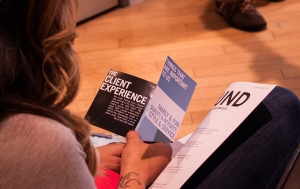 Diego, the Style Lounge, we started working with the owner on coaching up her team. We helped Randi articulate the Style Lounge core purpose and values, the “what we’re all about here,” and create a more standardized beauty experience, all presented in the “Style Lounge Way.” We then did a coaching session with Randi’s team, focusing on their success as independent beauty professionals and introducing the Style Lounge Way.

Just a few weeks ago we started working with Knockaround, a young San Diego company that makes sunglasses. They’re having a lot of success – at least enough to give away 20,000 pair of sunglasses at a Padres game every year. Another client we’re excited to be working with, referred to us by Product Etcetera.

We helped Knockaround on a promotion for their latest giveaway with the Padres, for which we built a custom web page with live social media integration. We also did a kind of photo booth we’ve called PartyShots, with live social media at the pre-game rally. This turned out to be a smashing success and we’re now refining the idea to offer businesses and private parties.

Now in June we’ve started working with a new client, Q Swimwear. We really like what they’re doing with their custom swimwear business and we’ve made an offer that we think will meet their needs. In fact, we’re going to start out with them by role playing as a prospective dealer for their product and evaluate their pitch, product, process and materials, followed by a core values/purpose discovery and a comprehensive report.

Just this week we’ve started working with a company called Bamboo Sk8. They make bamboo skateboards, and also have another company that makes bars and tables and other furniture and accessories out of bamboo. Their core values are quality, sustainability and generosity, which fall closely in line with what we’re trying to do, and we’re pumped to start working with them.

Finally, we have one last secret project we’re working on. It’s focus will be learning and teaching the skills and behaviors that attract and influence others. This is a long-term project that’s going to require considerable time and energy, but we see it playing a key role in our success.

Even in the process of writing this there are new clients and new projects, which I’ll have to save for another time.

We see the success of our clients and partners as our success – our whole purpose is tied to it. And so far we have exceeded our clients’s expectations. A good sign is that our last several have come to us by referral, and it seems like we’re getting a constant stream of referral business.

We’ve also been making important connections, and more keep happening. We’re out there, meeting people, doing work, connecting with people, putting out the Round Two vibe and long hair don’t care. It’s fun. We’re building a good reputation, and credibility. We’re the creative group that comes through when you need sick shit for your business.

We’re becoming part of a community that’s building in San Diego. It’s a community of young business owners, ambitious and

driven to succeed, who have pride in their city, and who support each other. And since one of our core values is building and influencing community from San Diego outward, these relationships will be central to living out that value.

So here I am with Lindsay Barto and our partner Laura Dobkins. We’re in it, right now, in the thick of it. We’ve had some tough times and some successes early on. We’re grinding through some challenges right now and it’s frustrating at times. And the big money isn’t coming yet by any means. But no one ever said it was going to be easy. 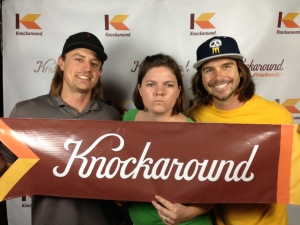 I’m reading a book right now called “No Excuses” by Brian Tracy, and it’s all about self-discipline and building the habits of hard work that lead to success. Putting aside the short-term gratification and personal enjoyment for the promise of the future that I envision for myself and for the Round Two Creative Group.

The thing is, I know what it’s going to take to be successful: to run a successful business, to write a book, to be the person I want to be. It’s not a mystery.

Until now I’ve been acting some of those behaviors; but not enough for what this is really going to take. I haven’t been doing it good enough, consistently enough – or just enough – to get it done. And it’s not that I’m expecting overnight success, but it’s still the work that needs to get done.

Almost two weeks ago now I decided to start living out those behaviors and stop making excuses. Since then every weekday has started at 05:00 with a drive down to Sunset Cliffs for meditation, followed by a roll call workout, then breakfast and preparing lunch, then studying Spanish then working on my book. By 08:30 I’ve accomplished a lot, but then it’s time to build a business and the day is really just starting. And for later there is endless reading and writing to be done.

It’s been a short time but so far it’s working. I’m doing the things it takes, a little every day. My lists are being riddled with checkmarks. It feels good when you did what needed to get done today. I’m not telling myself I’m going to do it every day forever, but if I can just do it tomorrow that’s good enough for now.

I’m combing these new behaviors with the five reasons why my business partners and I are never going to fail:

Roll call is coming early tomorrow but I’ll be there. Georges St Pierre says every successful day starts the night before. That means IT DON’T STOP! It’s time to dig in for the long haul.

Before parting with me, give something a try. Write down five reasons why you’re not going to fail at something important.

And in case you missed it, here’s what Round Two Creative Group is all about:

To creatively advance the interests of each client, partner, and associate while growing our influence on the world.

discipline in our work and attention to detail

respect and encouragement of individual ability and creativity

Leave a Reply to Adam A Cancel reply